Disclaimer – everything needs to be properly licensed some things can be used for free but some not. I will not explain in detail licensing in this tutorial.

Setting up ESXi home lab to test new technologies at home. VMWARE Workstation running Virtual ESXi hosts.
All hosts can communicate only with each other. For internet access i have one NAT adapter assigned to SQUID proxy Virtual machine installed in the ESXi FARM.
I installed 2 ESXi hosts with 20GB RAM and 2 with 7GB RAM
This offcourse depends on the capacity of your machine you are running the VMWARE Workstation on. At this point you can over-commit memory as it will not be allocated automatically by turning on hosts but only by real usage on them.
For Vcenter i needed to assign more than 10GB memory to at least one ESXi host as Vcenter appliance smallest installation requires 10GB.
For Datastores i tried to start up vSAN but the performance was unreliable on my Desktop therefore running only local Datastores on each ESXi host.
I used VMWARE workstation because i already owned license. But same can be probably achieved with other Virtualization tools as Virtualbox, KVM and others. 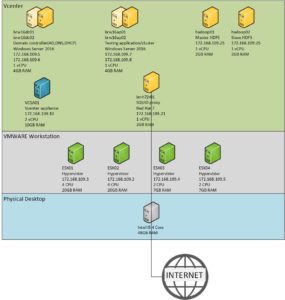 Currently i am using only 2 subnets out of 4 set up.
One is for all service adapters on VMs and ESXi hosts
and one is for the NAT access to internet.
Normally you would want to set up different subnets for ESXi hosts, different for VMs and network zoning like DMZ.
Here is screenshots out of the ESXi Network set up 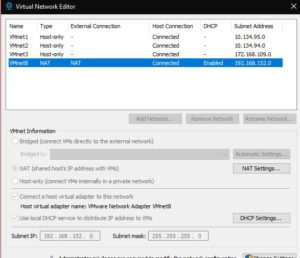 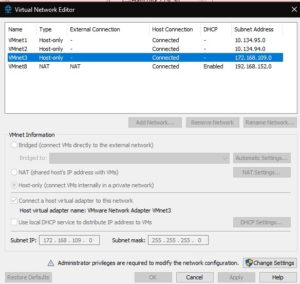 4.1 Network
There are 4 network adapters from one network to create redundancy. And in our case to test setup of the distributed switches in Vcenter.

4.2 Storage
It is good to have several disks in your desktop. That way you can distribute the VMs across other disks then your Desktop PC is running from and your ESXi hosts are running from. That way storage performance will not be your bottleneck.
1 disk for the ESXi Operating system
1 disk as main Datastore for Virtual machine
other two are optional for random testing. 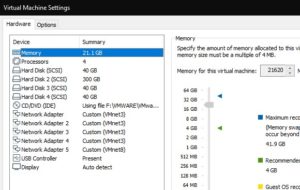